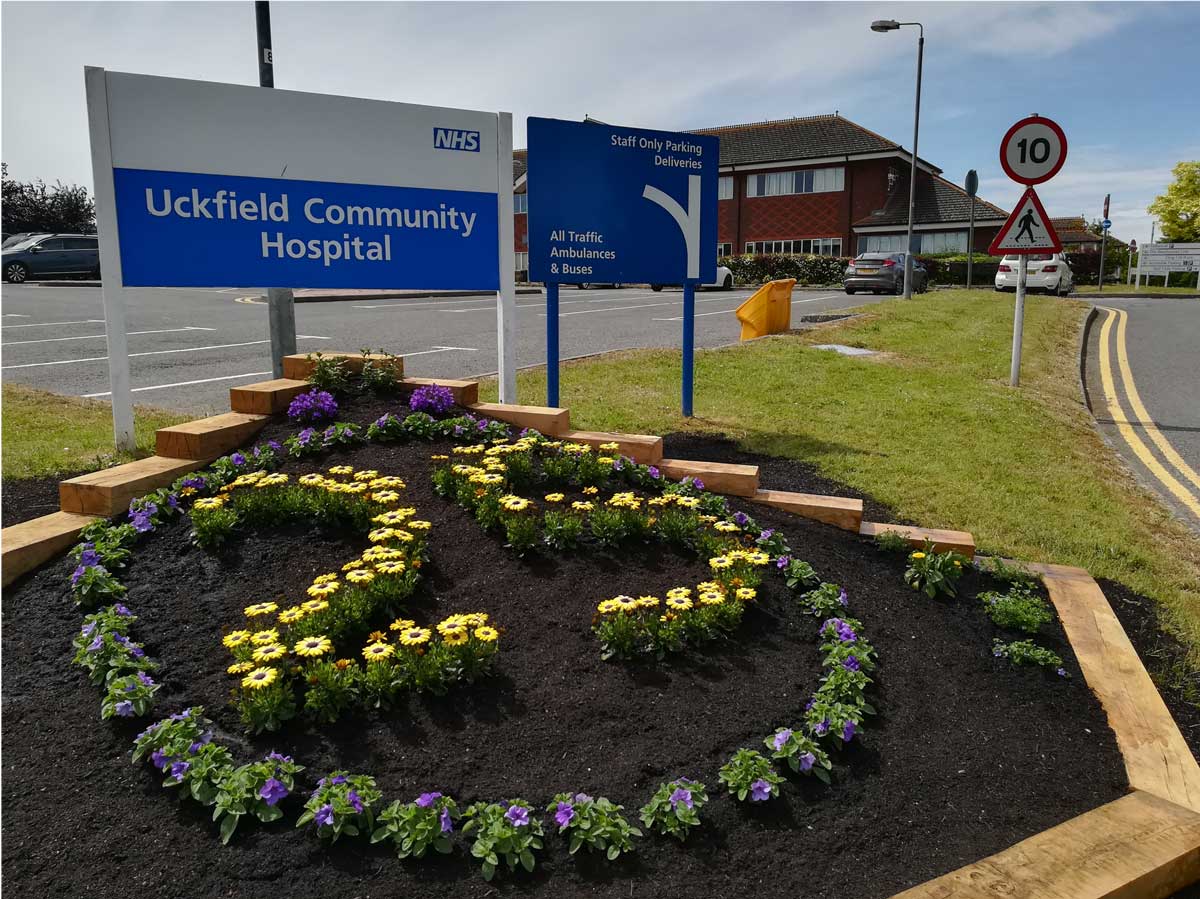 ’25 years ago on 31st of May, the Uckfield Community Hospital was officially declared open. This was not just a “replacement” for the old hospital but a sea change in health care for the community. For example, the new hospital has full operating and surgical services, a modern radiology & diagnostic department, a modern Ward layout with side rooms, 6 bed area, and a day area, together with a modern Minor Injuries unit, and a site for on call, out of hours GP service. The hospital also provides space for the Beechwood Mental Health Services and a GP practice.

So the 25th anniversary celebrations are a fitting culmination of a truly outstanding fund-raising exercise. Yes of course we are all extremely grateful for some spectacular individual donations, but it was the grass roots Uckfield population who found the money for the hospital, over a million pounds. The money was raised from innovative schemes to good old fashioned “tin rattling”. The key to its success was the local community getting behind the notion of building our own hospital. It needed imagination and inspiration to believe such a project was possible. Whilst it is completely correct to recall the tenacity in the way the local community rallied around the project, great credit must be given to the Health Authority. They were prepared to support a scheme which inevitably would create a huge increase in activity (& cost) compared with the old hospital. This activity has to be paid for by the Health authority, which in simple terms means paying for doctors, nurses and paramedical staff like occupational therapists, radiologists, physiotherapists, surgeons, anaesthetists and a host of essential staff needed to run a hospital.

The League of Friends, as a charity, continues to channel the input of the local community, in particular, giving much needed financial support. Our aim is to provide equipment and improvements for the welfare of staff and patients. As the requirements of the hospital continue to grow, in the face of NHS cuts, we are required to raise substantial sums of money. Just this month we have committed finance to the replacement of the X ray equipment to a state-of-the-art digital system. This produces high quality instant images with less radiation to the patient and a clean working environment.

As a relative newcomer to Uckfield and the League of Friends, I’m free to “blow the League’s trumpet”. There is no doubt without its support and organisational skills this project would not have happened 25 years ago. Whilst it is inappropriate to name names, one person’s outstanding contribution and persistence stands out, not only with the project but his support over the last 25 years, that is Bernard Trew. He was Chairman of the Fund-Raising Committee and Chairman of the League of Friends for many years, and now supports the hospital as President of the League.

We have marked the anniversary by commissioning a raised flowerbed to commemorate the 25years. An anniversary lunch was laid on by the staff. It was a particular pleasure to see Heather Green who worked at the old hospital and in this hospital since its opening. She has not only worked at the hospital but has increasingly been one of the main driving forces in attracting outside providers to work at Uckfield so providing a really local service to the town. I can assure that the hospital is full of amazingly dedicated clinical and support staff. The League’s mission is to support these staff in any way we can, as they face an ever increasingly difficult financial time.

Some other news: Mr Bonnici has requested to stand down as President of the League of Friends. Bernard Trew has kindly agreed to take over his role, and Chris Macve was elected as Chair. We also welcomed some new faces as Trustees, Susan Critchley who has very useful experience in banking, and Joy Burchell, who has a medical research back ground. We know they will contribute greatly to the team.

We are also very pleased to report that the new high-tech, digital x-ray system has now been installed. This was a considerable outlay by the Friends, but has huge patient benefits. It will speed up the process, reduce radiation exposure to staff and patients and has improved quality of resolution. What is so surprising the running costs are less than the old system, as there are no expensive and unpleasant chemicals.